In our first blog we aim to give you a brief idea of why our Oceans are so important and why we need to protect them.

Oceans cover over a 70% of the Earth’s Surface (NOAA) and contain around a 97% of the Earth’s water. But even though they are so large it is estimated that 80% of the oceans remain unmapped, unobserved and unexplored (NOAA). This unknown territory is crucial to our existence and we need to bet for Marine Conservation strategies to help protect our blue planet. Protecting the unknown is harder than protecting what we are familiar with, through our posts we hope to make this liquid world a bit less of a stranger for you.

Their importance to life:

Not only do oceans produce oxygen but they are very important carbon sinks. A carbon sink is a natural or artificial reservoir that absorbs and stores the atmospheres carbon through physical or biological mechanisms. Biological-pumps transfer surface carbon towards the seabed through the food-web; Physical-pumps transfer the carbon as a result of ocean circulation. Oceans are estimated to store 50 times more carbon that the atmosphere (Ocean and Climate Platfom).

Oceans Regulate the Climate and Weather on the Earth. They help keep the planet warm as most sun radiation is absorbed by the oceans, in particular at the equator, imagine them as being giant heat retaining panels. Land also absorbs heat but in less amounts. As oceans retain heat, their temperature increases and this causes water to evaporate therefore increasing the temperature, and humidity, of the surroundings. This increase in temperature and humidity creates rain and storms, giving back to the land the so needed fresh water. How does the warmer water from the equator move around the world? Thanks to the ocean currents, they act as conveyor belts taking the warm water and precipitation from the equator towards the poles and, the cold water from the poles towards the tropics. These currents regulate our global climate and without them regional temperatures would be more extreme and less of the earth’s surface would be uninhabitable (NOAA).

Their importance to our economies:

Our economies depend greatly on the ocean, so largely that a concept has been created to describe the wide range of activities related to the exploitation of the marine environment – Ocean Economy.
The most conventional use of the oceans resources is through fisheries, 15% of the worlds protein intake is represented by fish. Our oceans are also an important source of energy and resources. Offshore platforms exploit the seabed in search of minerals, oil and gas. Renewable energies are starting to get more presence through offshore wind farms and the use of tidal and wave energy. Oceans are key in the transportation of goods and commerce, as well as offering large number of jobs (NOAA).

Their importance to our wellbeing:

When we think of the ocean we generally think of summertime, holidays and a great soothing feeling floods our bodies a completely normal and obvious association as the oceans are a key factor in our leisure time. Less known are the benefits brought to our health, it has been long observed that being near the sea has health benefits, it has been shown through several studies that people living or being near the ocean grow ill less often and experience lower levels of mental stress (SOPHIE).

All in all, Oceans sustain life as we know it. Thanks to them we can breath, they trap excess carbon in our atmosphere, keep our Earth with a nice and comfy weather, they provide us with food, jobs and help us stay calm in these crazy times. Without them we would not be here. So let’s give back to the Oceans a bit of what they give to us. Help us Protect them. Bet for Marine Conservation initiatives and push to get others aware of the importance of our Oceans.

The Oceans are not only magnificent,

but also essential to our existence.

Help us protect them. 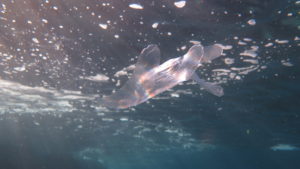 Threats to our Oceans

Oceans are essential for our existence, but they are under threat. Join us in a quick peek